Where on Earth is Ithaca?

A Quest for the Homeland of Odysseus
By Cees H. Goekoop 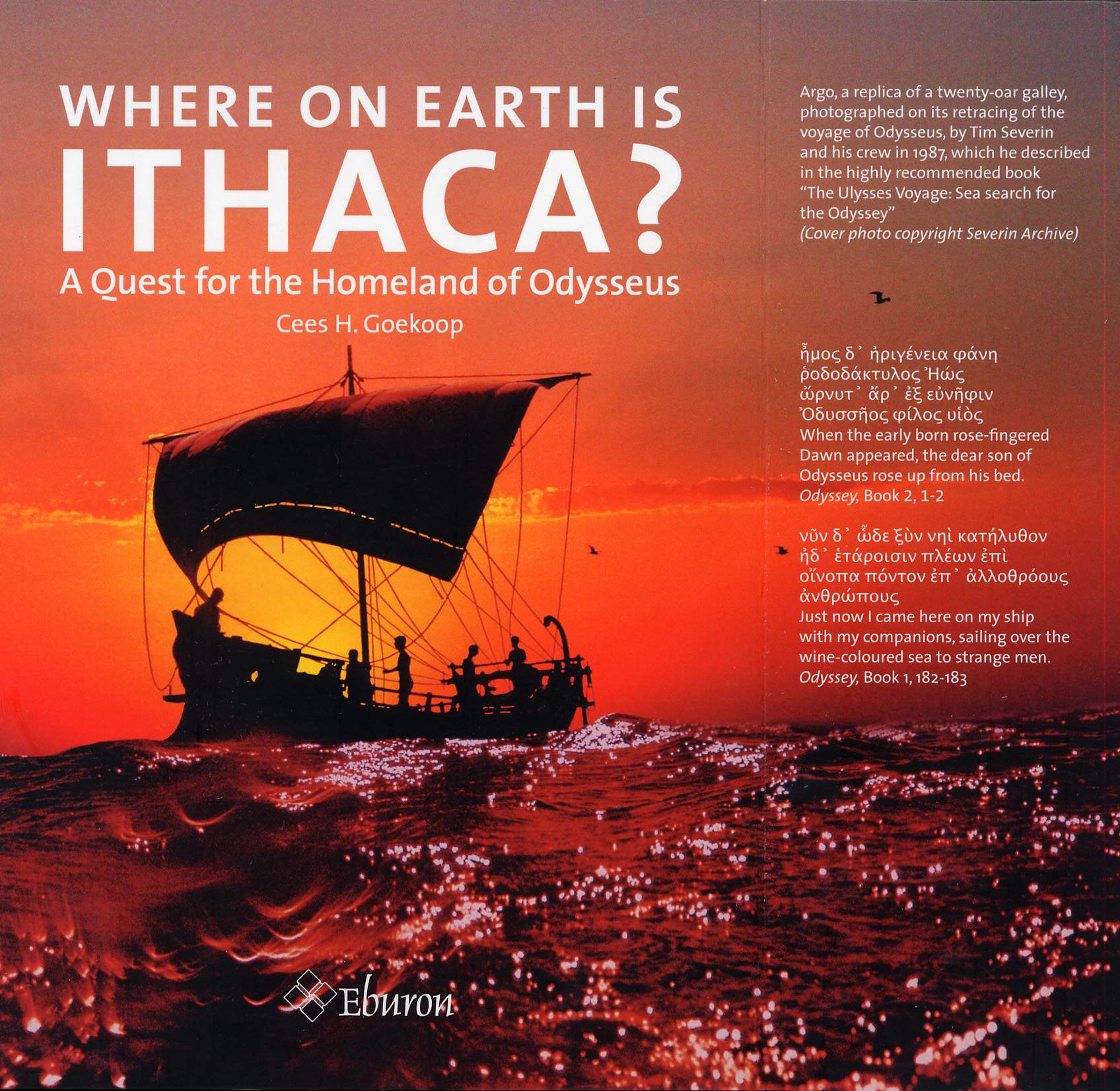 Traveling through Greece with the book in my hand in 2006, finding all the landmarks that I once had read in the Odyssee, was astonishing!
When I found out that the Greeks were building appartments right where the palace of Odysseus must have been, completely unaware of that, because the book was in Dutch, I decided that an English translation had to be made and published on internet. Cees Goekoop agreed, and we made and published a revised version in English.
If you are interested: for educational purposes I can provide you with the books for just the transport costs.

I have given presentations about the book to schools and interested other groups, and when I do, I present a remarkable theory about the location of ancient Ithaca that is different than the original theory of Cees Goekoop. During the almost 4 years we worked on the English version, including a revision of the book, mr Goekoop never agreed with me, but the week before the book was published, he called me and said that he decided that I was actually right, and that he had made a very subtle but essential change to the book…
Did I tickle your curiosity now?

A compelling detective story merging Homeric myths (or are they not all myths?) with real locations.
The reader is challenged to participate in the debate by visiting the areas mentioned in the book and deciding for himself.
Prof. Ian Munro, Manchester Literary and Philosophical Society, England

Thoroughly recommended as a lucid, concise guide through the tangled thickets of scholarly literature which have cloaked the location of Ithaca. This book brings the reader to a fresh and intriguing viewpoint overlooking Homer’s landscape.
Tim Severin, explorer and traveller, author of The Ulysses Voyage, Ireland

In this exciting book C. Goekoop takes the reader in a fascinating journey through the world of the Odyssey and tries to unlock the mystery: which of the Ionian islands is Ithaca?
Prof. Nanno Marinatos, University of Illinois at Chicago, USA

There are many good reasons why this book should reach a wider audience. Mr Goekoop demonstrates the importance of analysing the local geograph from the large number of clues provided in the Odyssey. His methodology and research have been outstanding.
Robert Bittlestone, author of Odysseus Unbound, England

You find in this book a very clear, detailed history of what is called “The question of Ithaca” with its main actors, Strabo, Gell, Völcker, Leake, Partsch, Schliemann, Dörpfeld, Pavlatos, Volterras and A.E.H Goekoop.
Giles Le Noan, author of The Sunset Ithaca, France

It’s always difficult to overturn accepted wisdom. This is a well researched ‘wheredunit’ that casts genuine doubt on where scholars have presumed Homer’s Ithaca to be, and proposes a genuine alternative.
Tony Buckley, Head of Communications, Daresbury Laboratory, England

The book challenges the long-held notion that Homer’s Ithaca is modern-day Thiaki. It is engaging and informative, and should appeal to a wide range of readers, including those with little prior knowledge of Homer’s epics.
Dr Jo Davy, Victoria University of Wellington, New Zealand

Through a close, thorough and sensitive reading of Homer’s poems, Goekoop has added important new linguistic arguments to the centuries-old debate about the location of Odysseus’ Ithaca. This book is essential reading for anyone who has ever read the Odyssey and asked the question, “but where on Earth is Ithaca?”
David Anderson, Classics student, University of Manchester, England